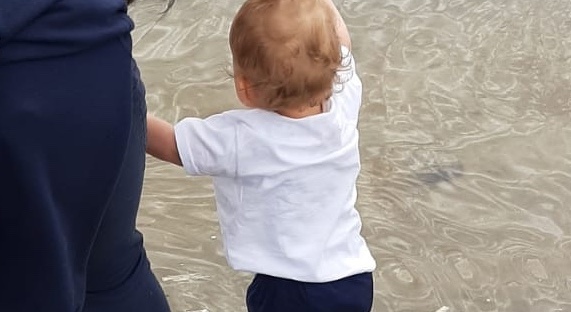 I don’t know about you, but something I’m struggling with during this pandemic, is finding things to do with our little man. Yes, we have settled into a comfortable routine at home, but it is very much “same old, same old” at this stage. As lovely as it is, I’m so aware that he needs so much more than the four walls of our home.

But, apart from going for walks, what else is there to do with a 14-month-old outside of the house? Not only that, in Ireland it rains – a lot – so, depending on the amount of rain, walks aren’t always practical! Plus our little man is at the stage where he’s happy in the buggy, but only for a short time – he’s walking now, and he wants to be trying out this new found skill at every opportunity! There are also no baby groups to go to; no indoor activities, such as soft play; and to be honest, at this moment in time, it’s hard to know when these things will resume. As he has no siblings, I’m conscious that our little man is not getting to mix with any other children, but then I comfort myself with the fact that he’s not the only baby/toddler, in this situation at the moment. In fact, I’m glad that he is still so young, that – I’m hoping – this lack of mixing isn’t having too much of an effect on him.

I’ve brought him into the local town, as a change from a walk, but he’s not really into shopping! Also, because everywhere is so limited, there are not many shops that I can take him into anyway, so going into town tends to just be another walk where we occasionally walk through a shop!

But then yesterday, with the weather was that little bit warmer, I had an idea – the beach! Now we have been going to the beach with him, but we keep going to a beach where it’s difficult with the buggy, but it’s also impossible to get parked close enough to carry him, so the best that we can manage is to stand and look at the sea from the seafront. He does enjoy that, especially when the surfers are out as there’s more to watch, but he’s not really doing anything.

However, the beach that sprang to mind yesterday, was a safe beach, where I knew I’d be able to park close by and carry him onto the sand, then he’d be able to walk. An extra benefit was that it is also near my mum’s, so we met her there.

Well, when we arrived, this was all new to him. So, initially he clung to me for dear life, rather than letting me put him down on the sand, even though he has these (very cute, I might add) beach shoes. However, eventually he braved it, toddling along, holding my hand. We then got to the sea itself. The sea on this particular beach is so shallow for quite a long way, plus it’s calm, that it’s ideal for small children.

Our little man wasn’t too keen on paddling at first, but, after watching me, he braved it – and loved it! It was all so new for him, the sand, the sea water, and the scenery. For me, it was such a lovely experience to have with him and to see him so excited about something new! And yes, in his excitement, he fell fully clothed into the water – with me right next to him, I might add, so it was a temporary dip! I had foreseen that and had a set of spare clothes for him – what I didn’t think about was to bring a spare set for me! I got soaked too – rescuing him and carrying him! The great thing was that he wasn’t bothered about getting wet, in fact he wanted to go back in again!

We then went to a local café afterwards, with all the new regulations in place, of course. There appeared to be no high chairs available, but our little man just sat on my knee, more interested in watching the life buzzing around in front of him, instead of thinking about what mischief he could get up to!

It was such a simple afternoon but, so much enjoyed by all of us, it was a slice of normality in the “new normal”. It made me realise just how important these tastes of normality are. And our little man? Well, let’s just say the combination of sea air and excitement meant that he slept very soundly last night!

View all posts by NewMumNewLife

1 thought on “A normal afternoon”